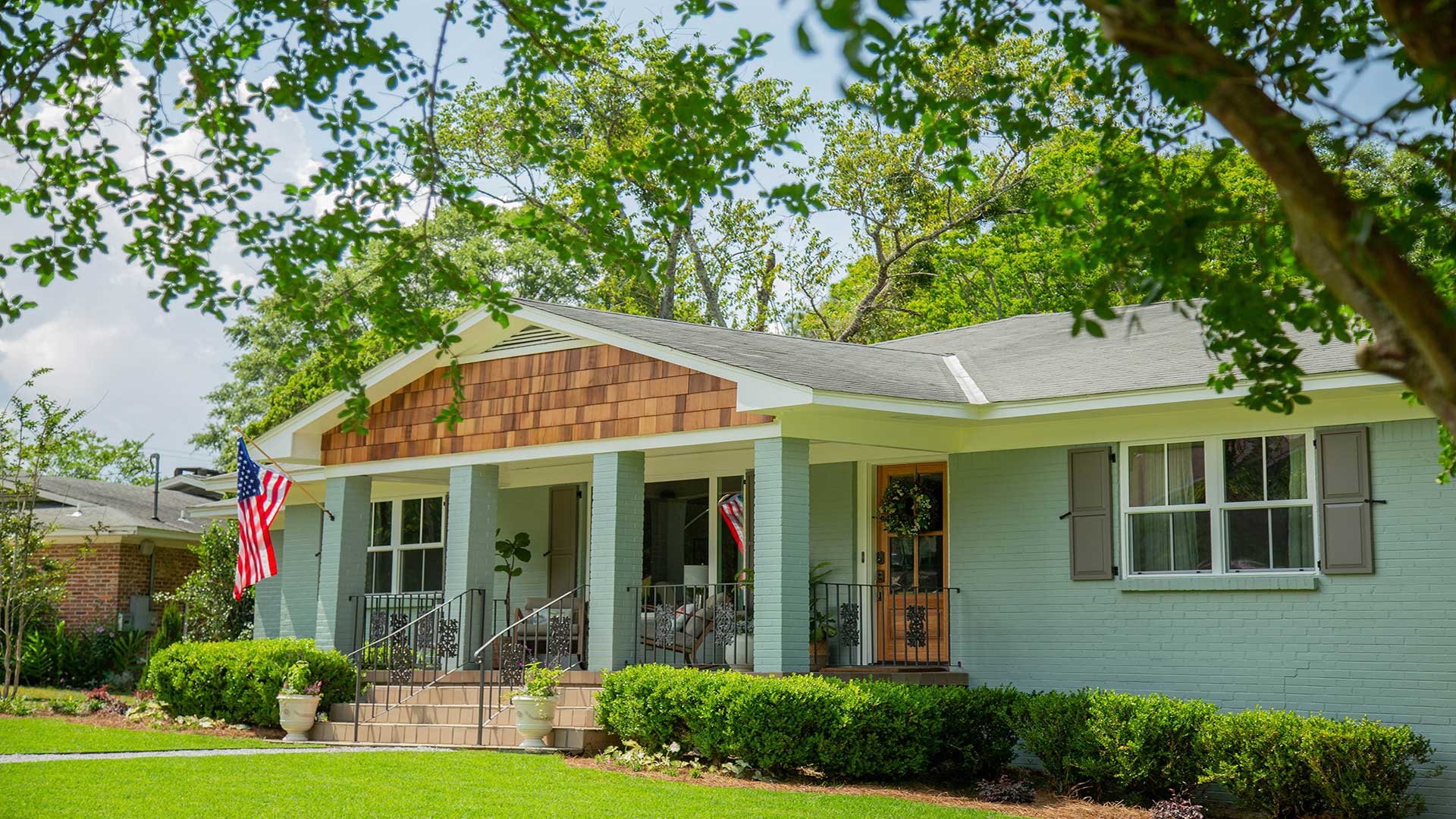 
In this episode, we’re focusing on improving the exterior design of Chelsea’s ranch-style home.

Several months ago, Chelsea and her husband Brandon bought a mid-century house. They have already done some minor updates before moving in with their three children, Gus, Mary Helen and Lucy.

Now that they have been living in the home for a while, Chelsea and Brandon are ready for some bigger projects that will really make a difference.

We’re giving the exterior of Chelsea’s home a facelift from the 1950s and bringing it into this century!

Chelsea and Brandon’s home was built in 1956, so replacing the windows — originals to the place— is a must. The old windows were rusty and leaky — keeping them was out of the question.

After we take measurements, Low-E, energy-efficient JELD-WEN windows are installed around the perimeter of the house and sealed.

The windows are sealed with Duramaster, a super-flexible new caulk, to keep them air and watertight.

Just like the windows, the garage door was old, rusting and leaking.

Chelsea and I built the new garage doors using wood planks in a diagonal pattern for that modern look. As soon as we install the new doors, Chelsea gets busy sanding and staining them.

She chose a natural stain to bring out the grain in the wood as well as protect them from the elements.

By replacing the windows, we also needed some new shutters to complement them. Chelsea chooses to paint the shutters a warm brownish-gray color by Behr.

Once Chelsea paints the shutters, we start installing the mounting hardware and begin to hang the shutters around the perimeter.

The grass was worse for the wear, so Chelsea and Brandon decided to pull it all up and start from scratch. Like we always say, “Do it right, sleep at night!”

Laying sod is pretty easy. First, you till the land. Then, you water it, and then you lay the sod and you flatten it.

Of course, it’s much easier with a team helping you.

Chelsea’s house was built in 1956 and it didn’t look like much had changed since then.

The color was kind of “Blah,” the windows were rusty and leaky, as was the garage door, and the lawn and landscaping were a little out-of-control.

There was really nothing to draw your eyes or make you take notice of the place.

But NOW, the whole corner seems to be alive and begging for attention. The new color on the walls is cheerful and bright and the new windows have the clean, modern look that Chelsea wanted, plus a lot more efficiency.

New shutters continue that crisp look, and the new front door adds warmth and character to the house, along with the cedar shakes on the front gable and the new garage doors around the back.

The exterior updates of Chelsea’s house really took her curb appeal to the next level. It now has a welcoming feel to the home and has brought this mid-century home back to life.